Trick Eye Museum was revamped in late Oct 15 and now, they have new exhibits as well as an interactive 4D concept within the museum. 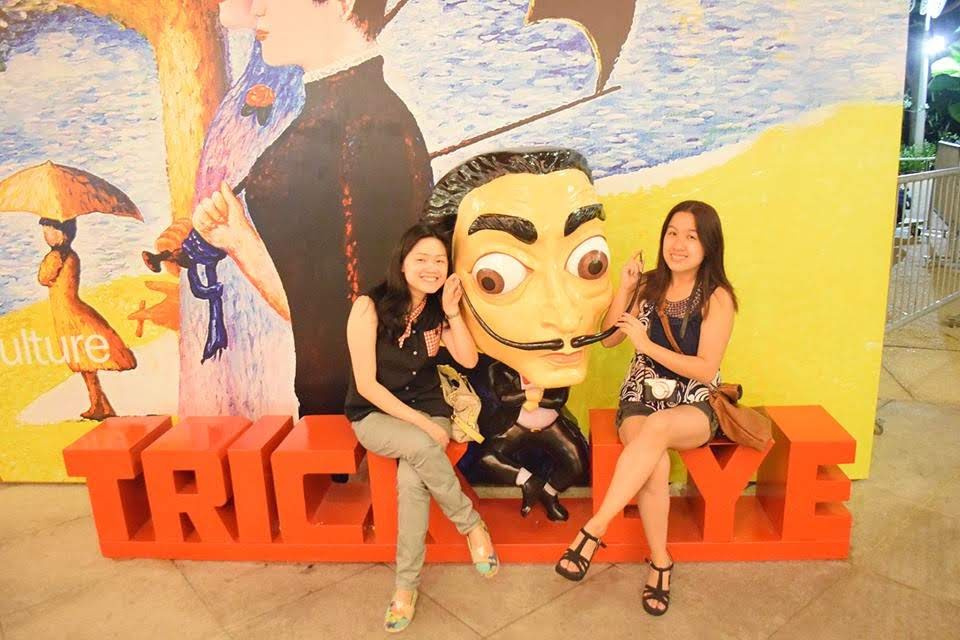 Two weeks ago, I was thrilled because I got to explore Trick Eye Museum's new exhibits with the bloggers from The Influencer Network.

Greetings from blogger friend Pearly, Mr Moustache and me! :) 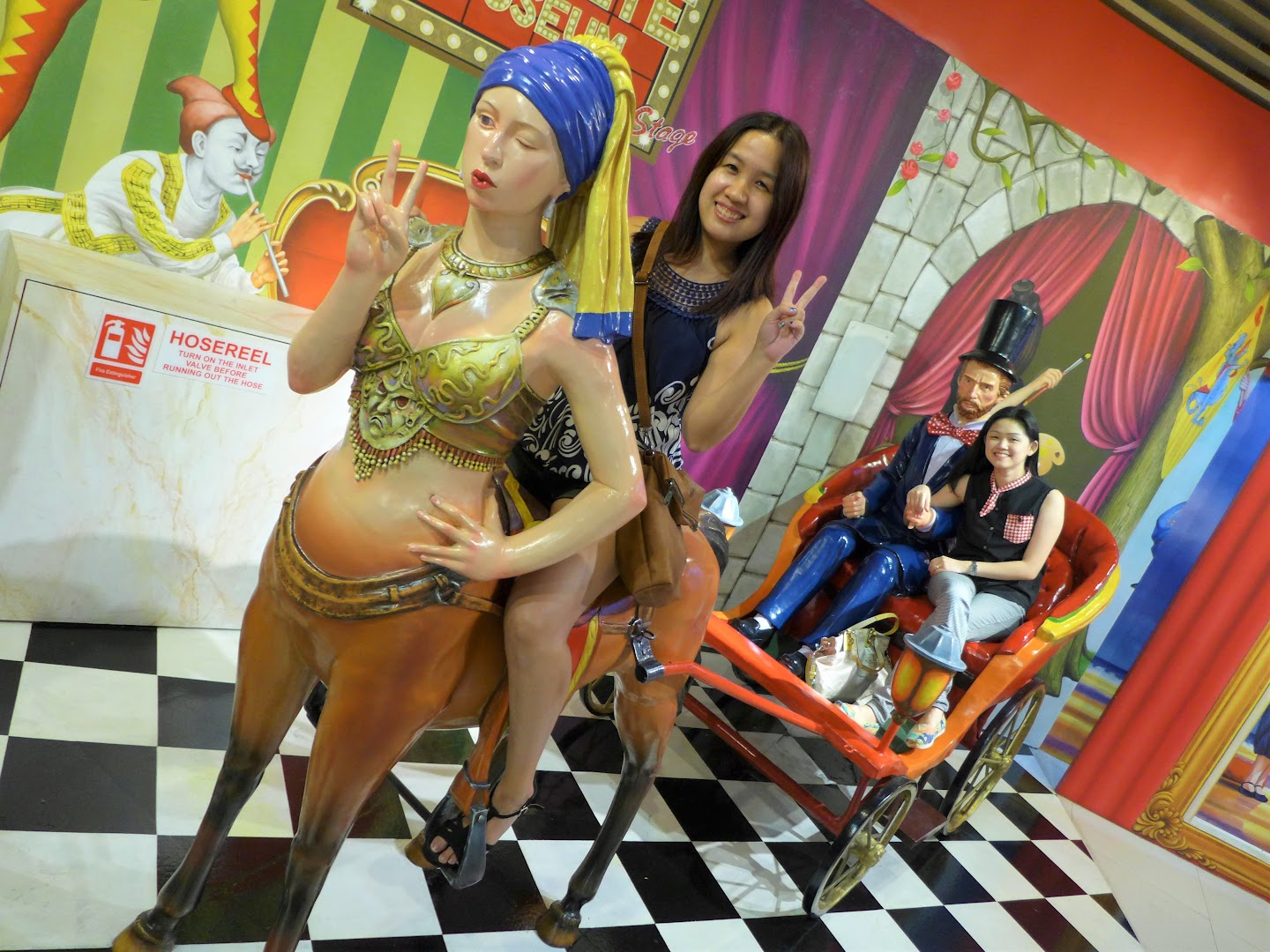 Off we went for a little adventure within Trick Eye Museum, with me volunteering to ride on the centaur of course! 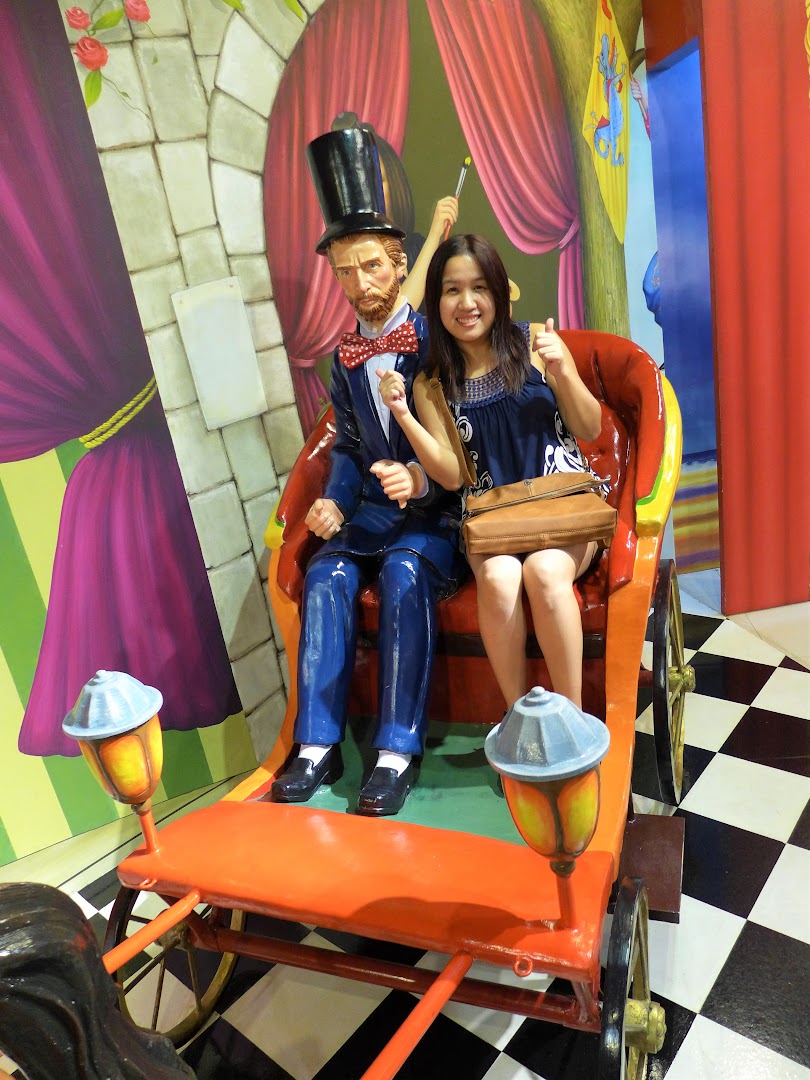 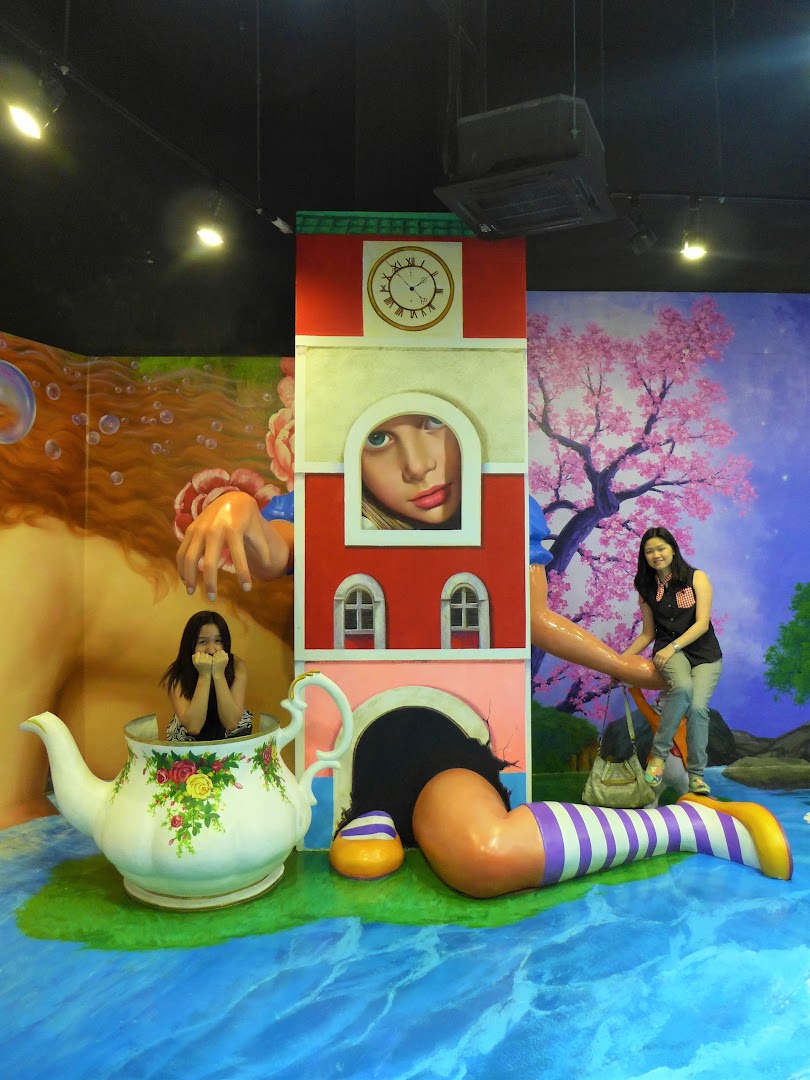 I did attempt to ride with the gentleman there but he didn't seem pleased with my over-enthusiasm.

Pearly and I found a giant trapped in a building and decided that we should pose for photos! Yes, clearly, saving the giant wasn't at the top of our minds. 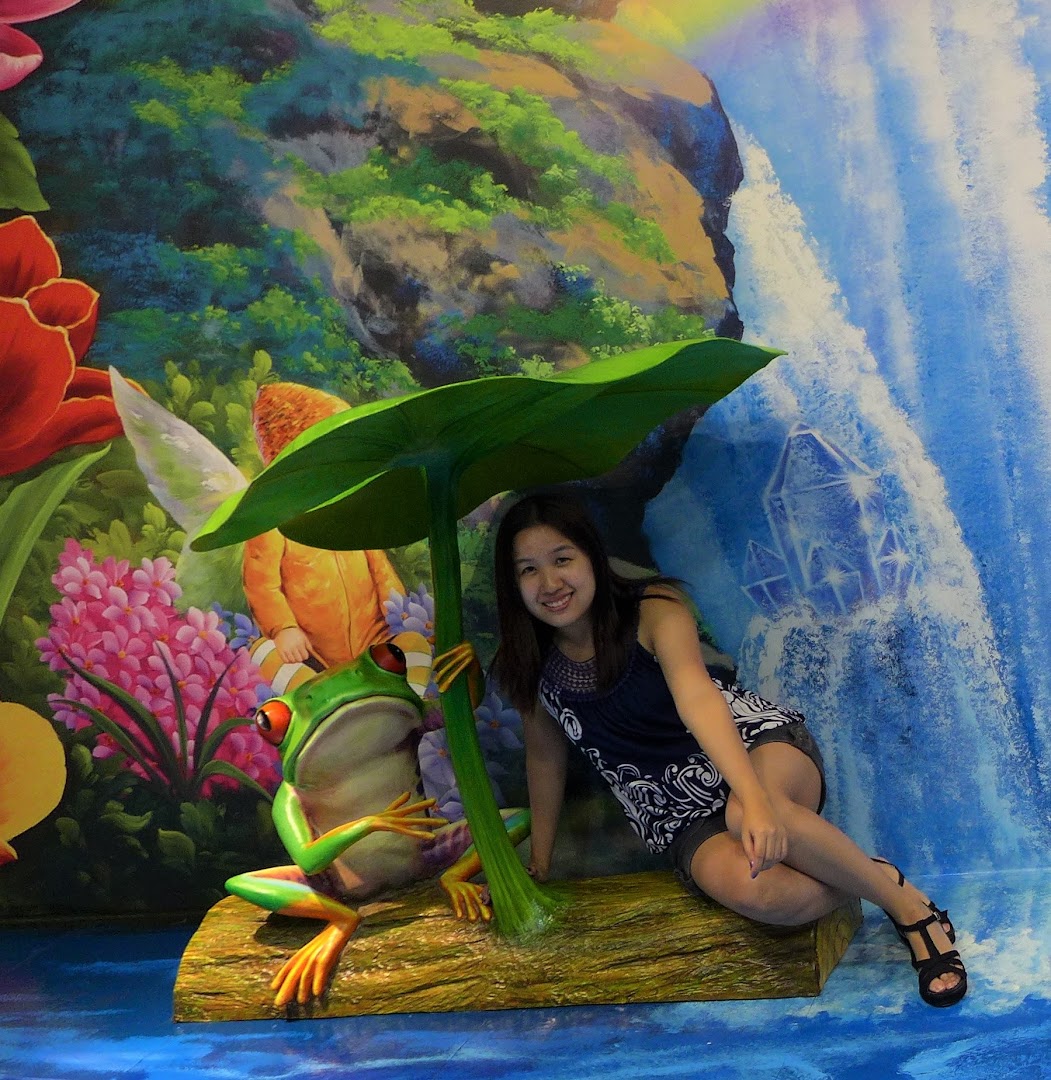 Spotted a frog, wondered whether it was my frog prince and decided to help myself to his umbrella leaf. He didn't seemed happy to share. 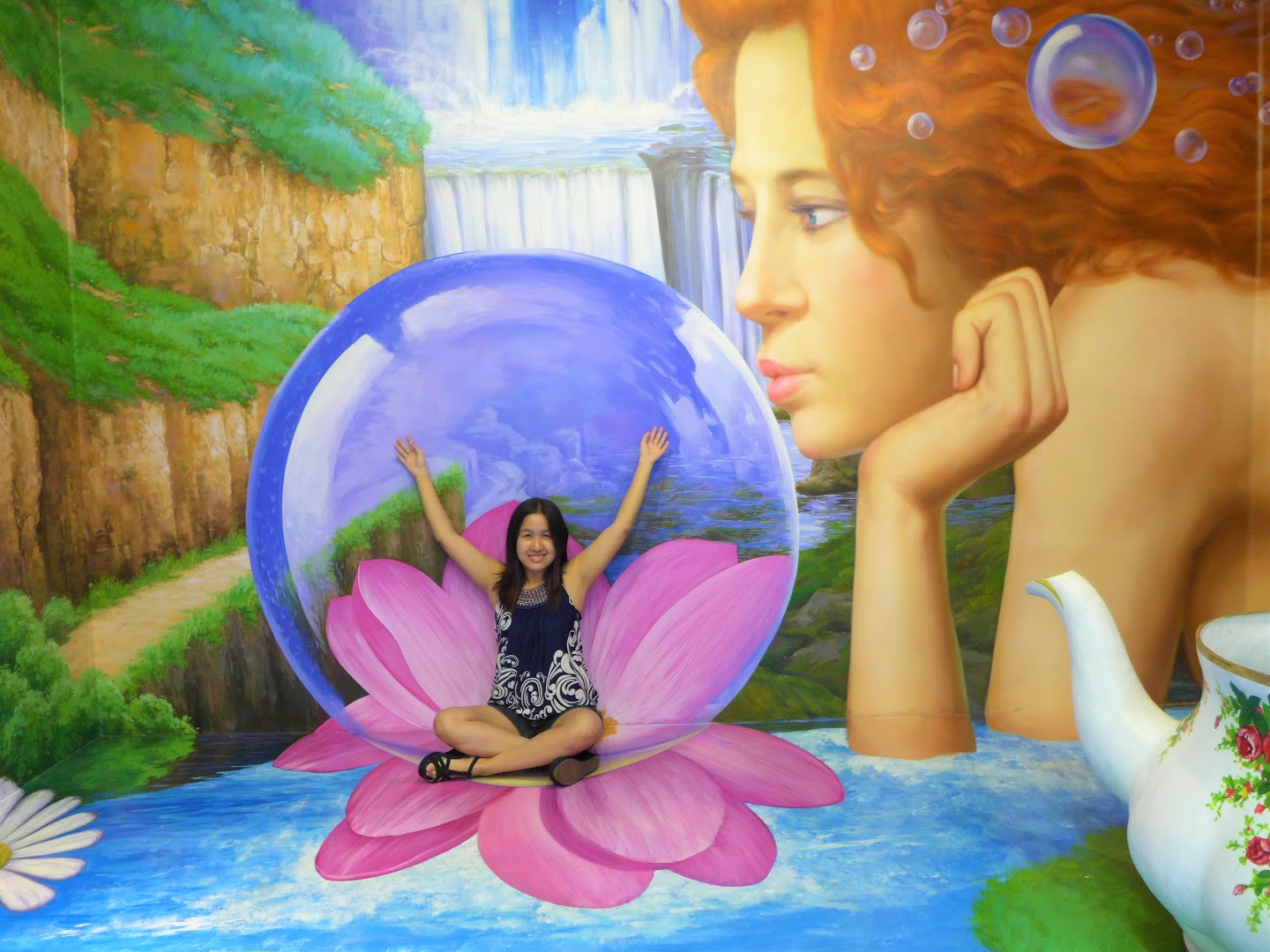 I was supposed to look angelic in this bubble but I guessed I prefer to just air the armpits. Weehee! 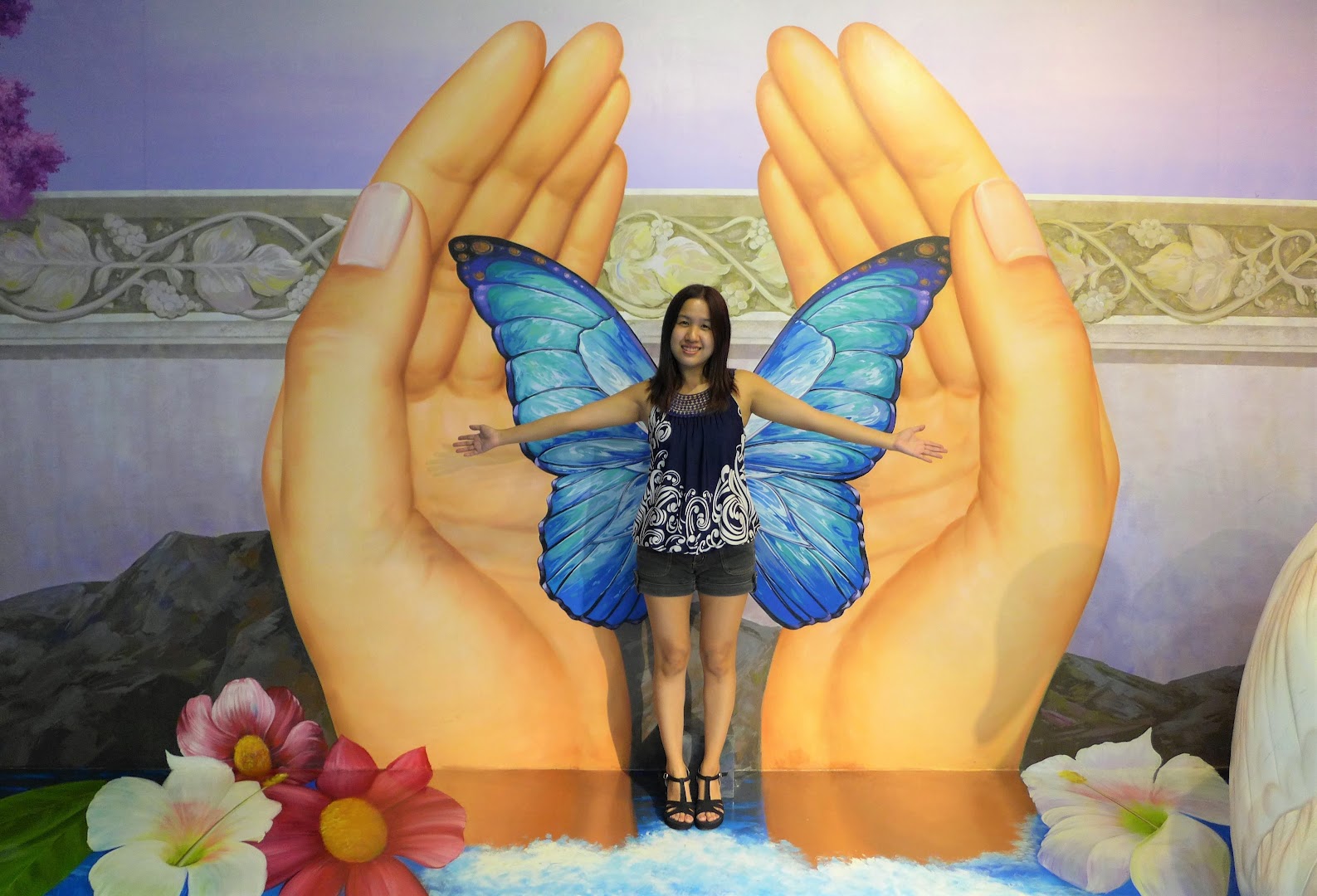 Second attempt to look angelic because... I'm... a butterfly! 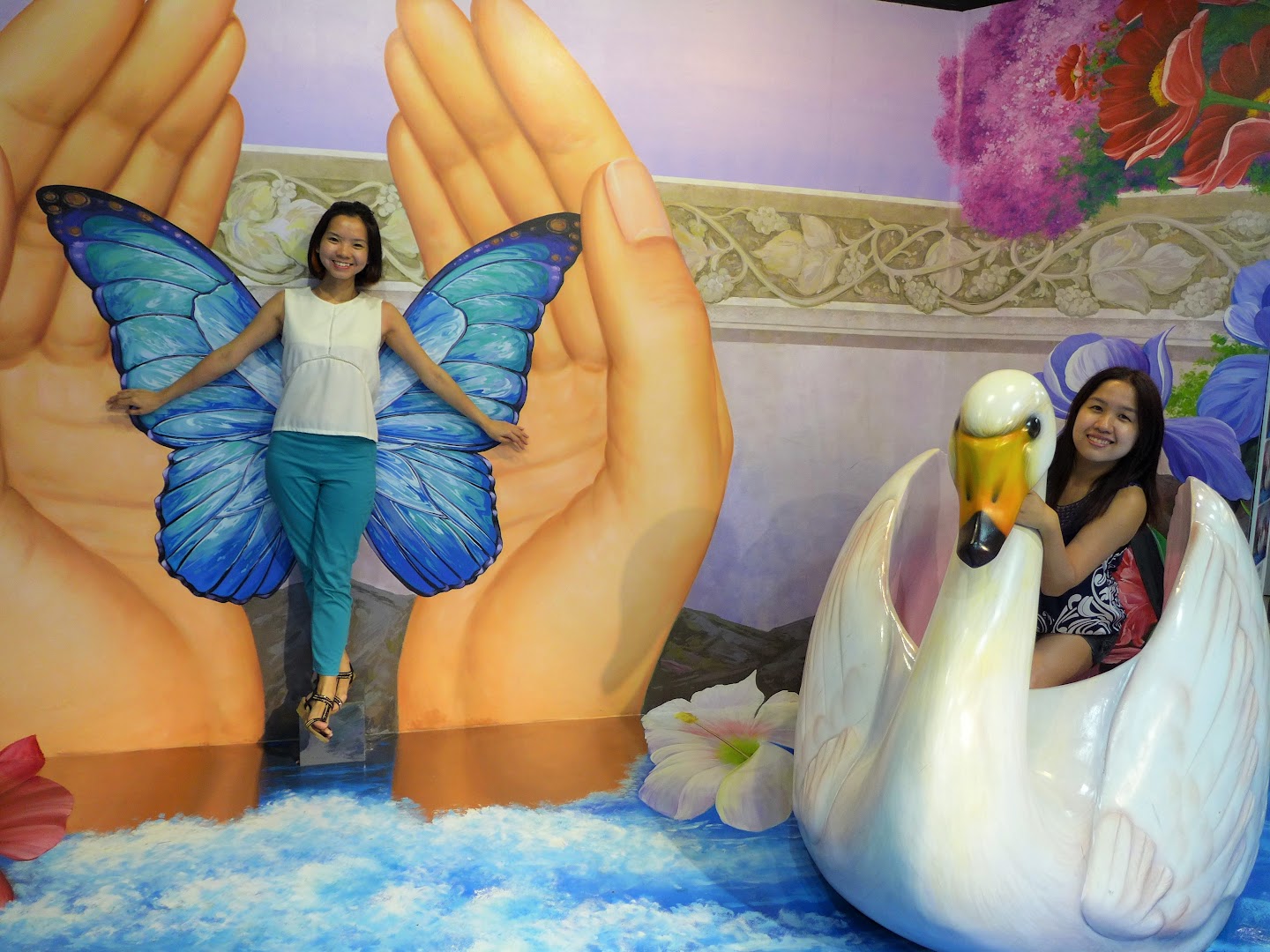 On second thought, I think Jia Hui looked more like a butterfly than me.

I actually took a photo with the swan during my first visit to Trick Eye Museum. It was one of my favourite exhibits because it was against a beautiful backdrop of a castle. This time, they shifted it to a new position but that's not stopping me from taking photos with it again! 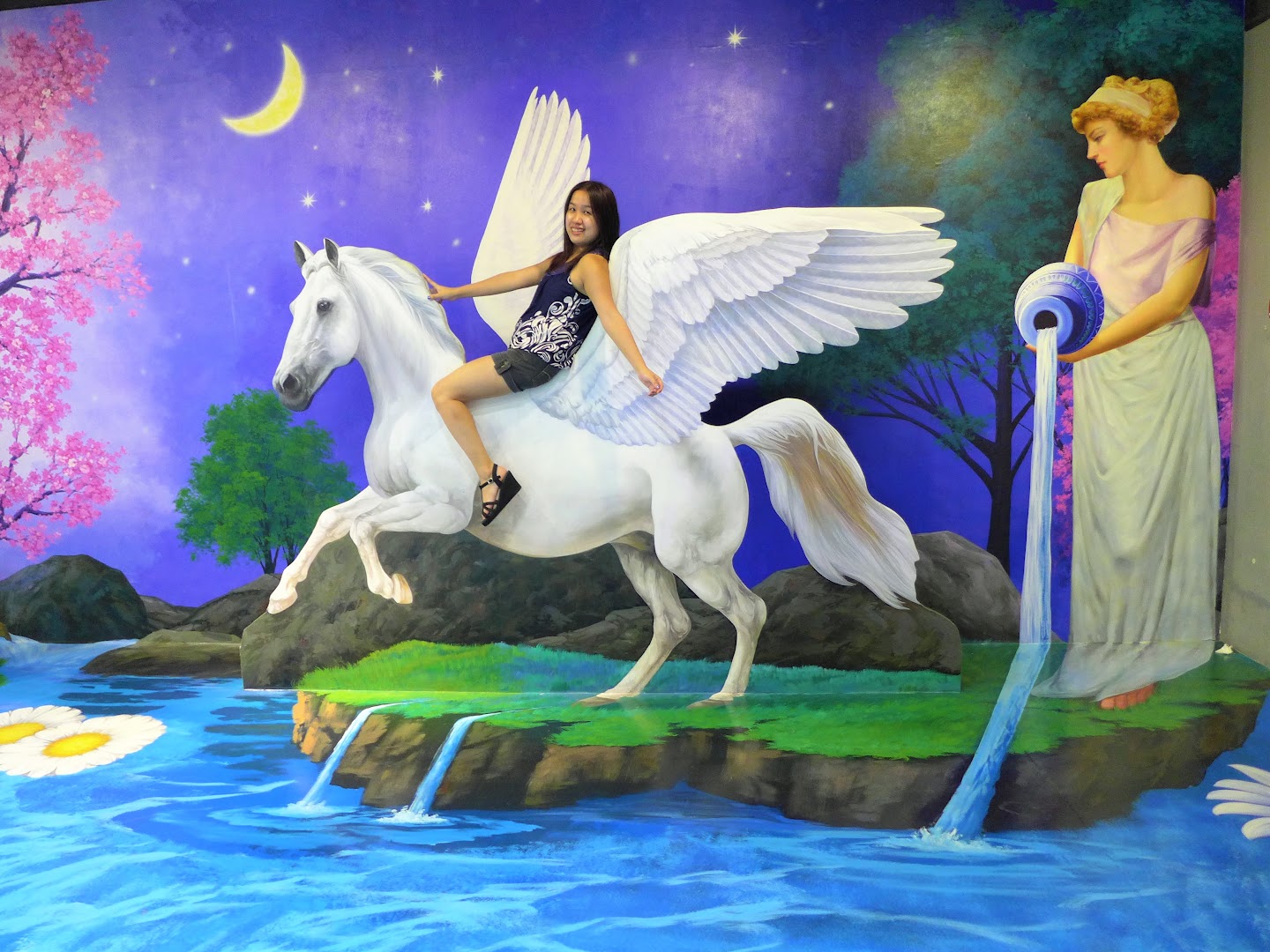 Favourite picture of the night. Giddy up, flying horse! Bring me to the moon! 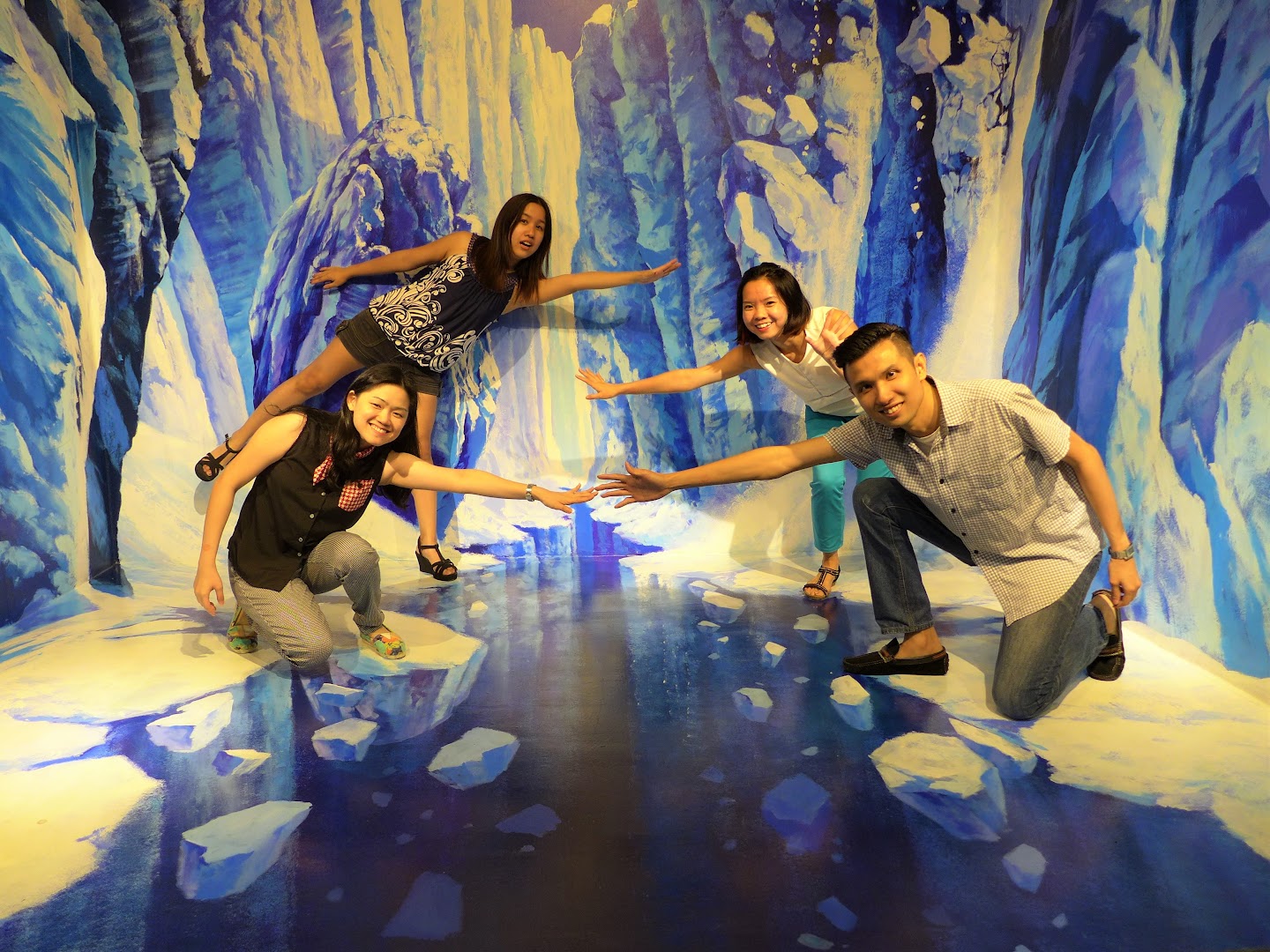 That awkward moment when you realized that you were the ONLY ONE looking scared to be separated from your friends when the ground broke apart.

Everyone else were all smiles. Why the joy?! 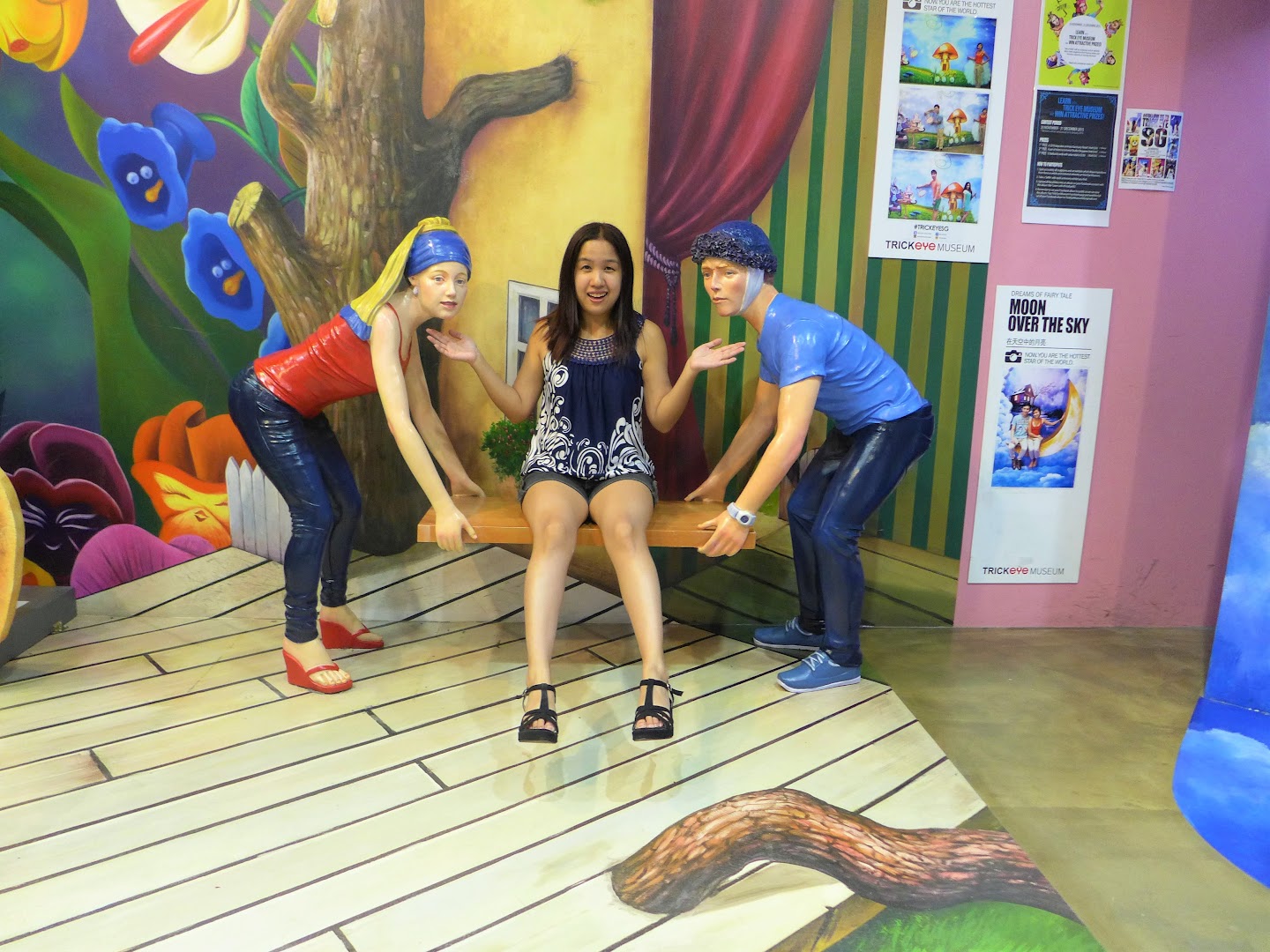 Feigning a look of utter surprise that there were other people who could lift my weight besides myself! 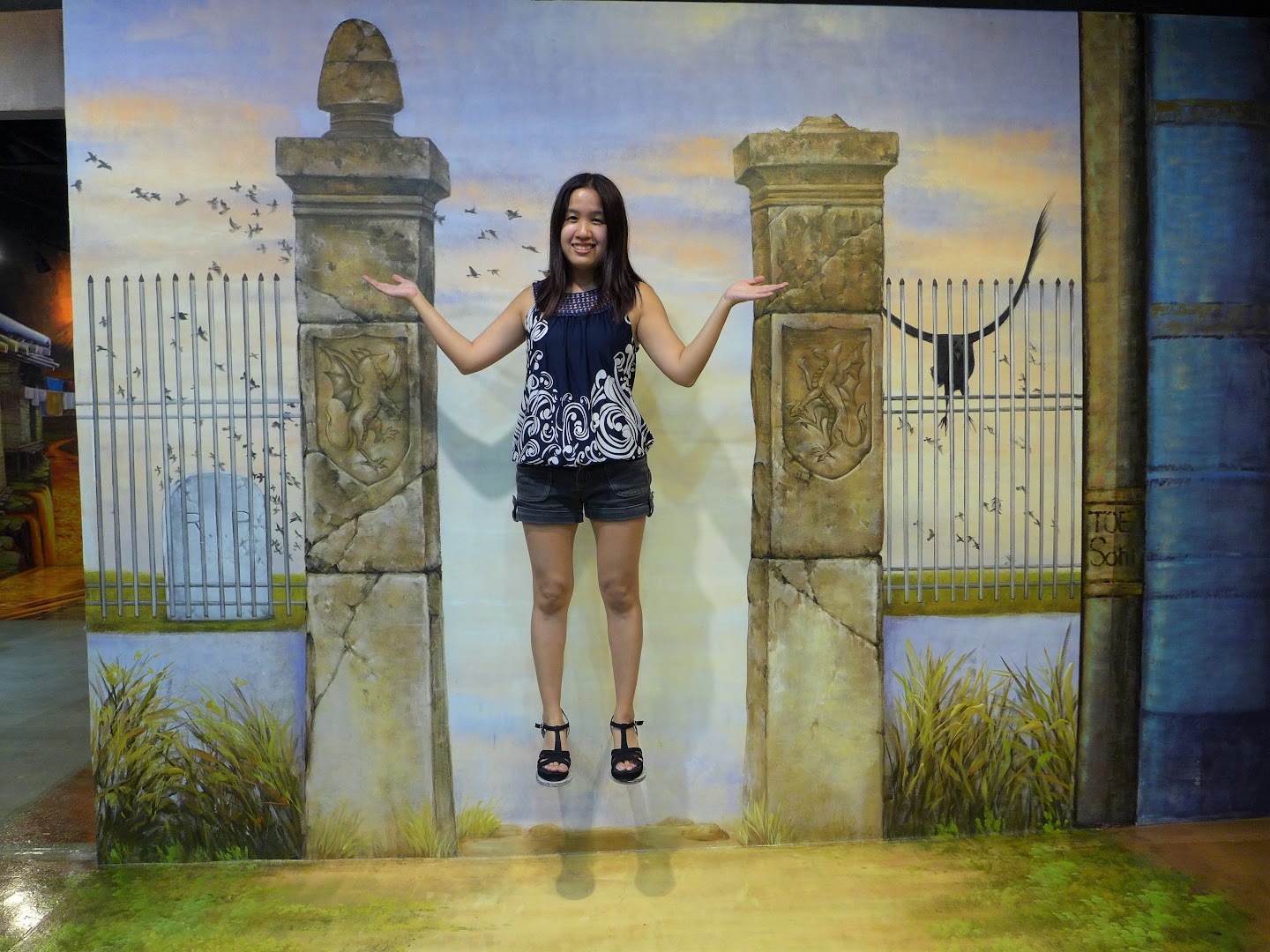 I was clearly very unoriginal in my poses (comparing this picture and the one above) but hey, there's still a difference okay? First, I sit while other people lifted me. Now, I levitate and lift myself. 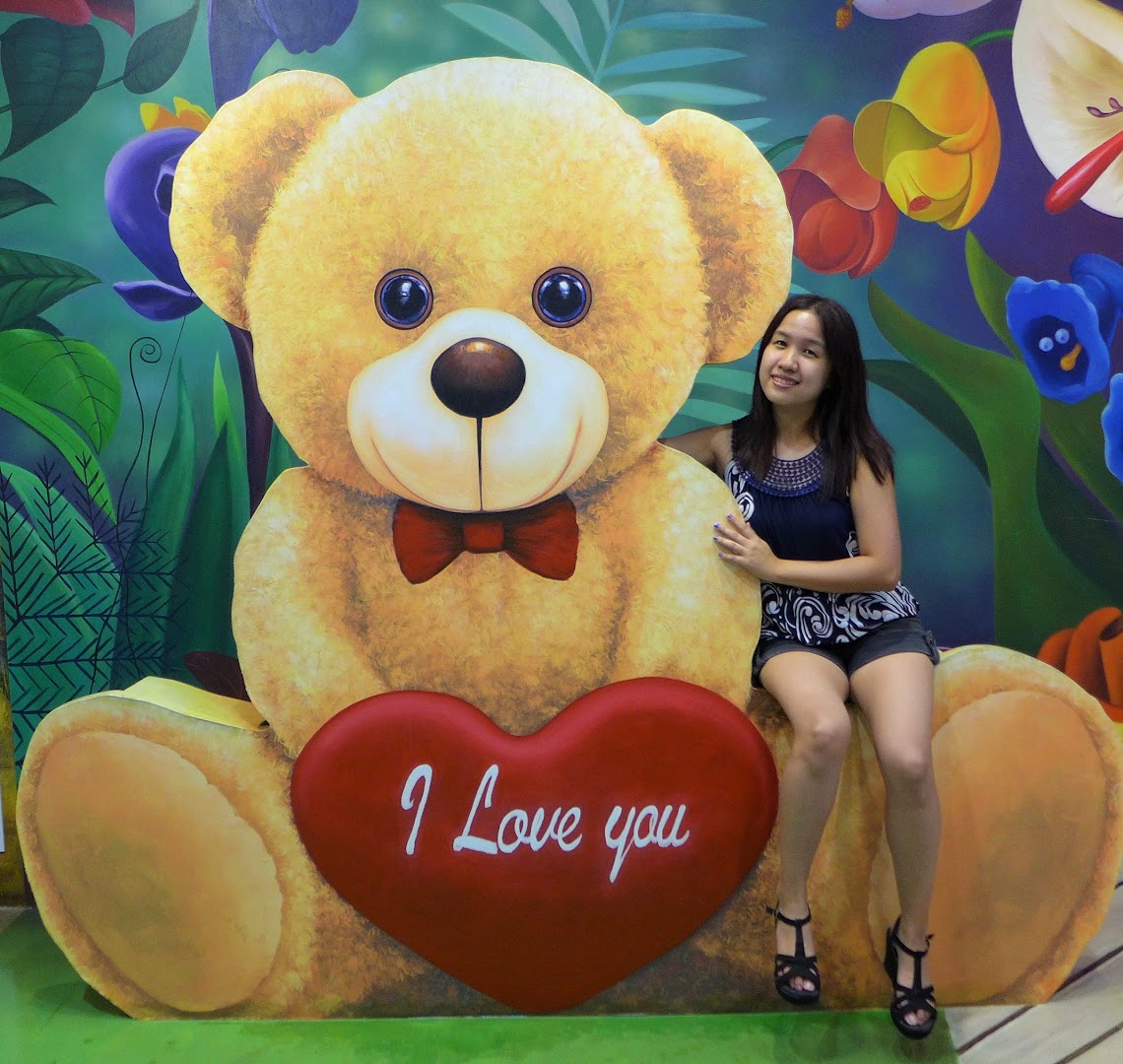 This large teddy bear was suffice to bring out the child in me as I rushed excitedly to pose for a photo with it.

I dedicate this photo to Shen! :) 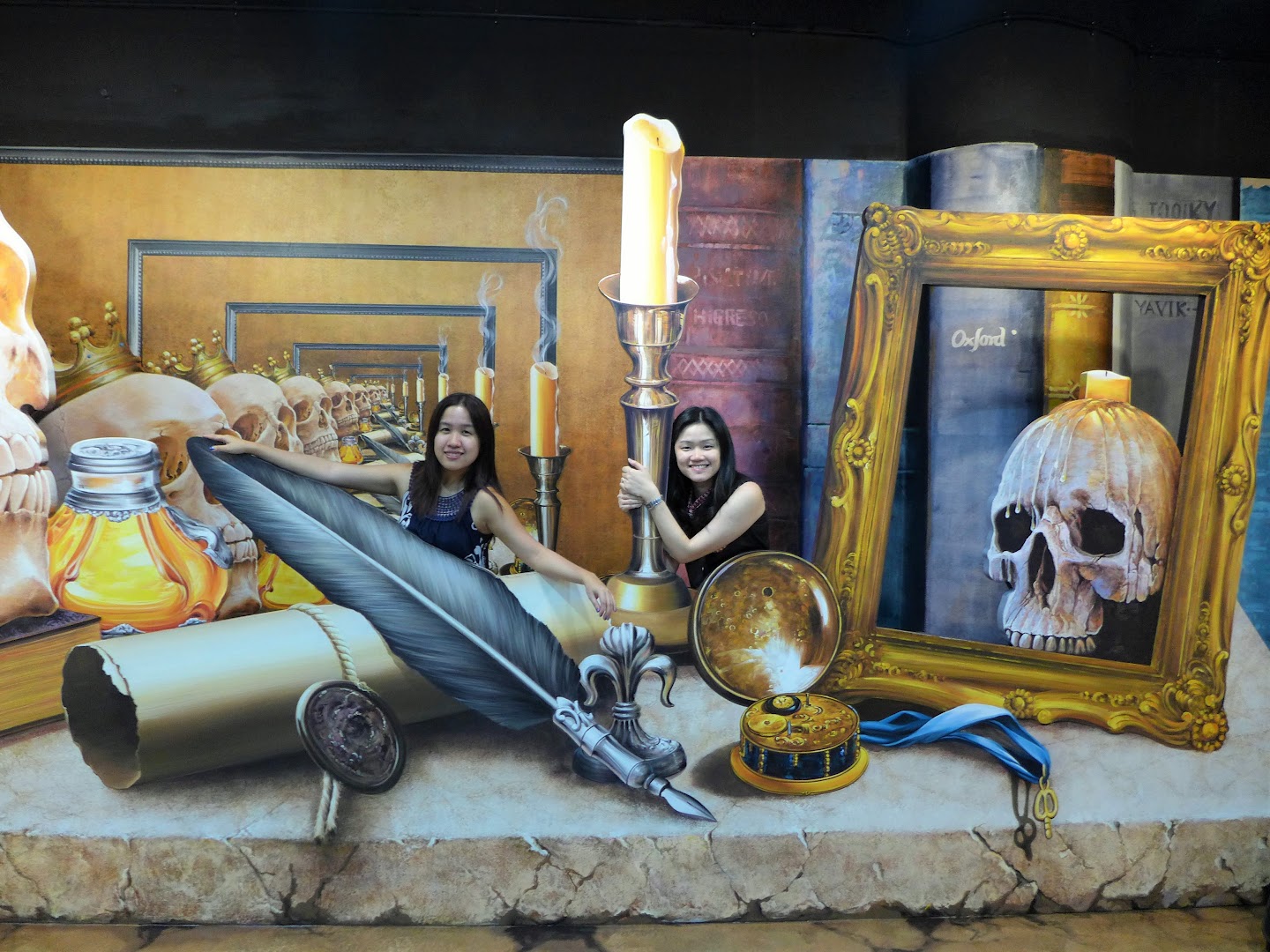 Entering the emo-goth zone where the exhibits seemed a tad... depressing. You know, skulls and such. 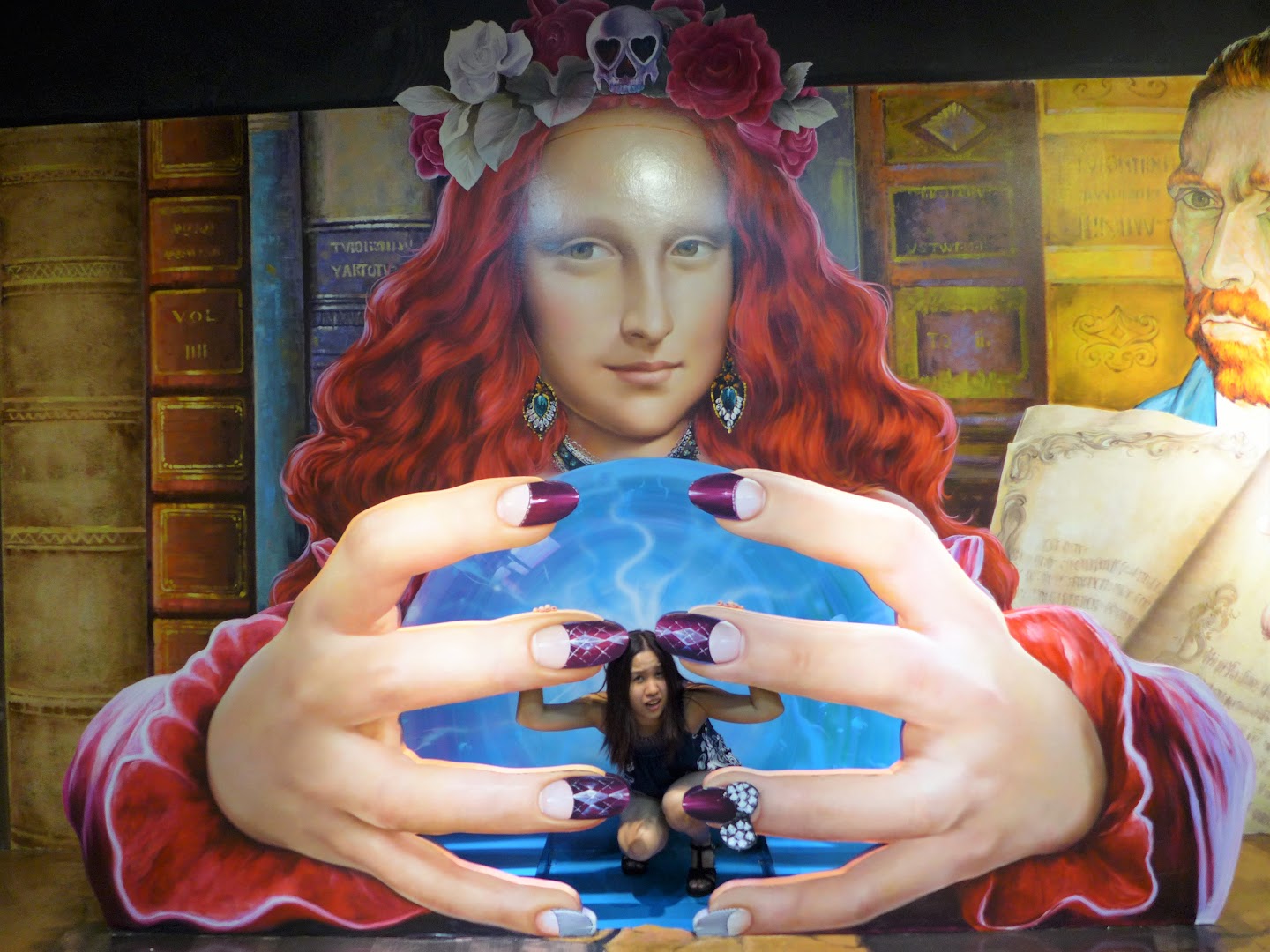 Trapped within the evil clutches of this red head!!! Oh wait, is that gelish manicure? 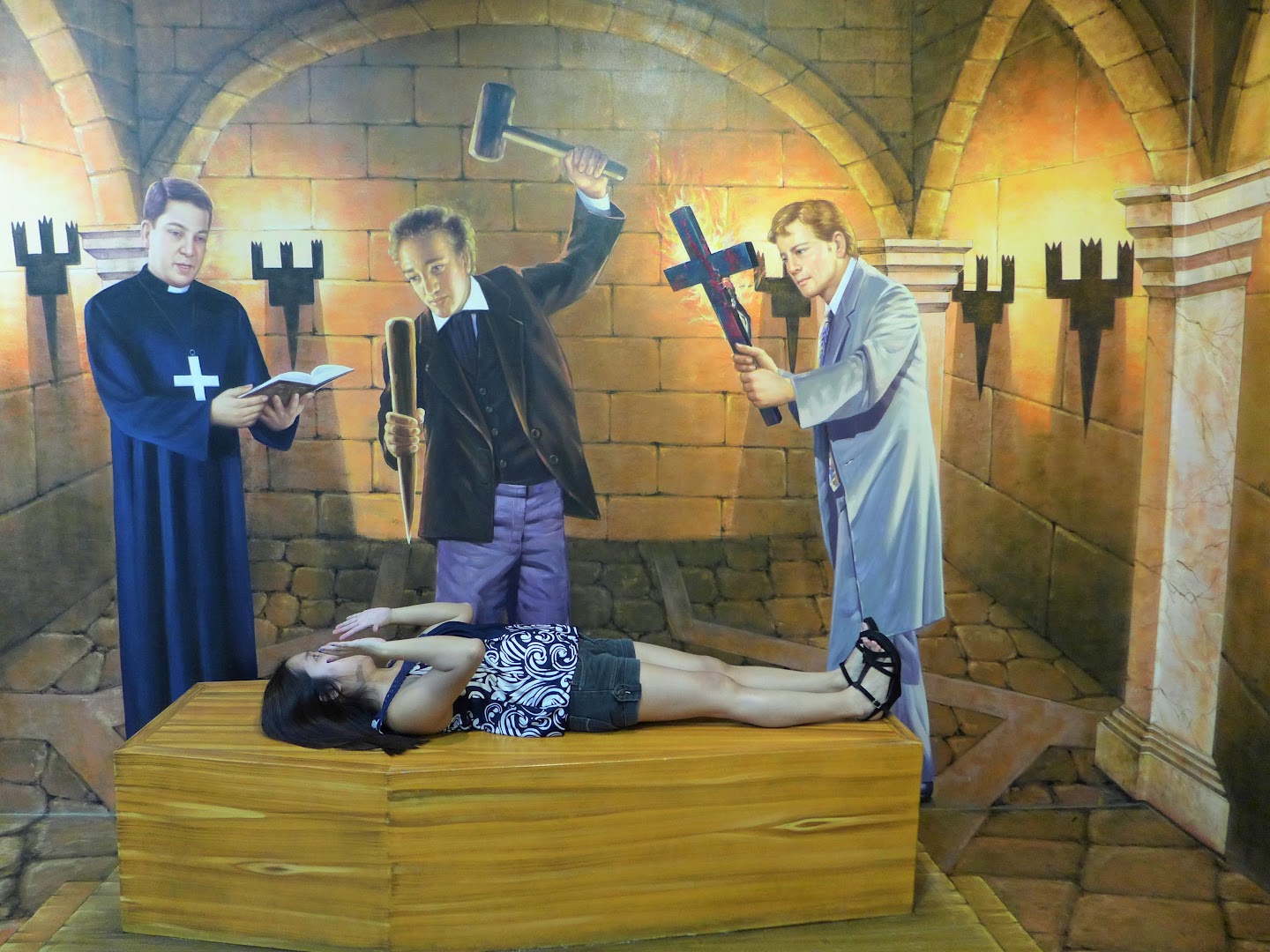 What did I say about the exhibits being depressing? This was a clear winner.

*proceeds to let out bloodcurdling scream 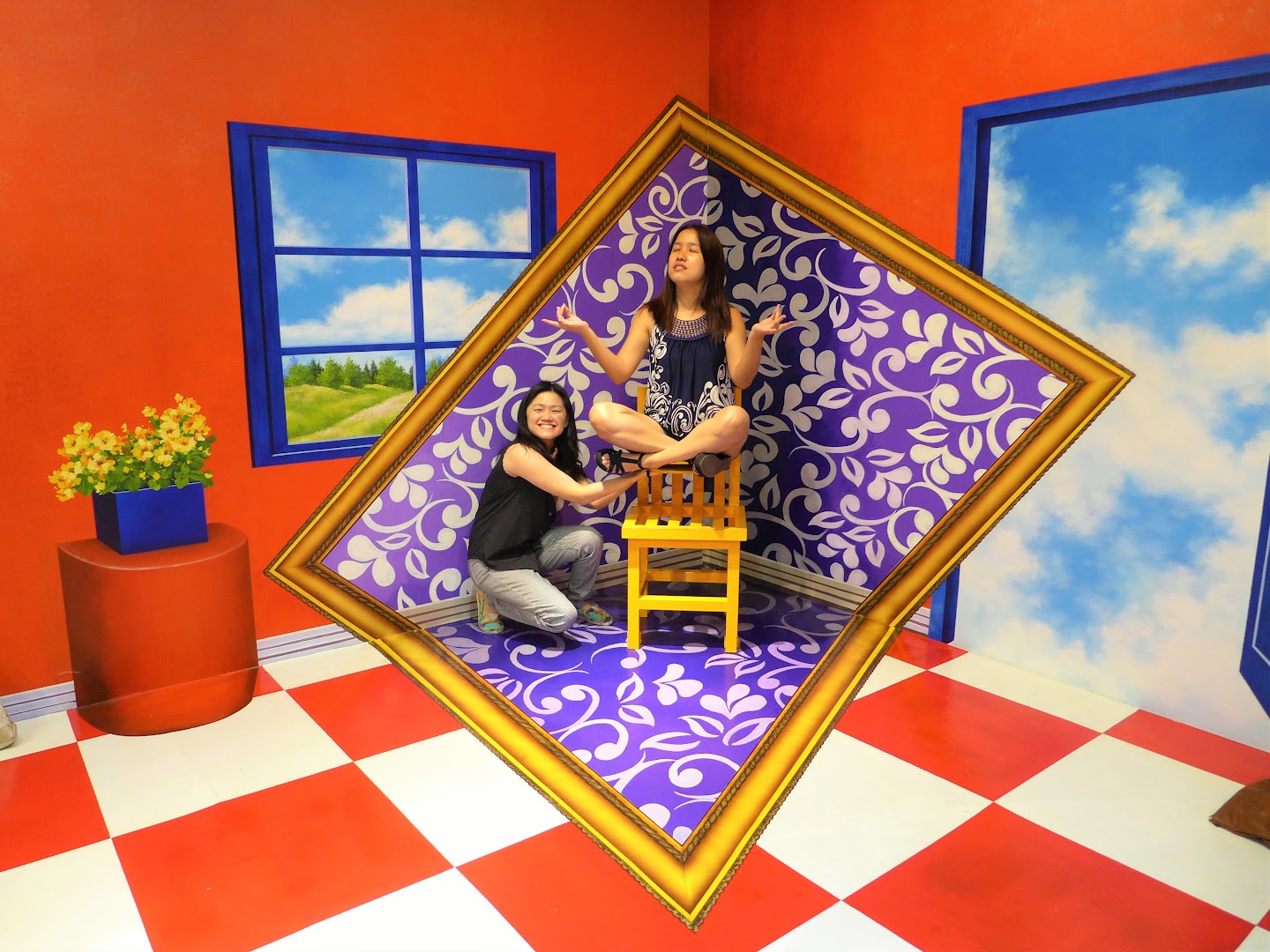 We went exploring some other exhibits that we missed out last year and this was one of them.

Pearly appeared to be assisting me but don't be fooled by her. As you know from the previous pictures, I have the ability to levitate and lift myself. 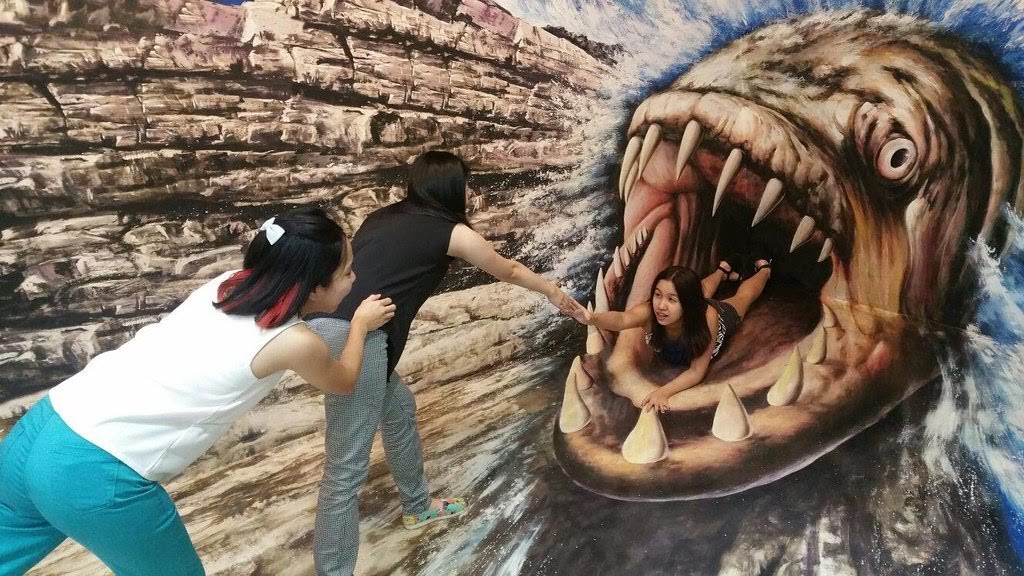 The ladies saving that damsel in distress from being eaten by a fish. Oh wait, that's me. :) 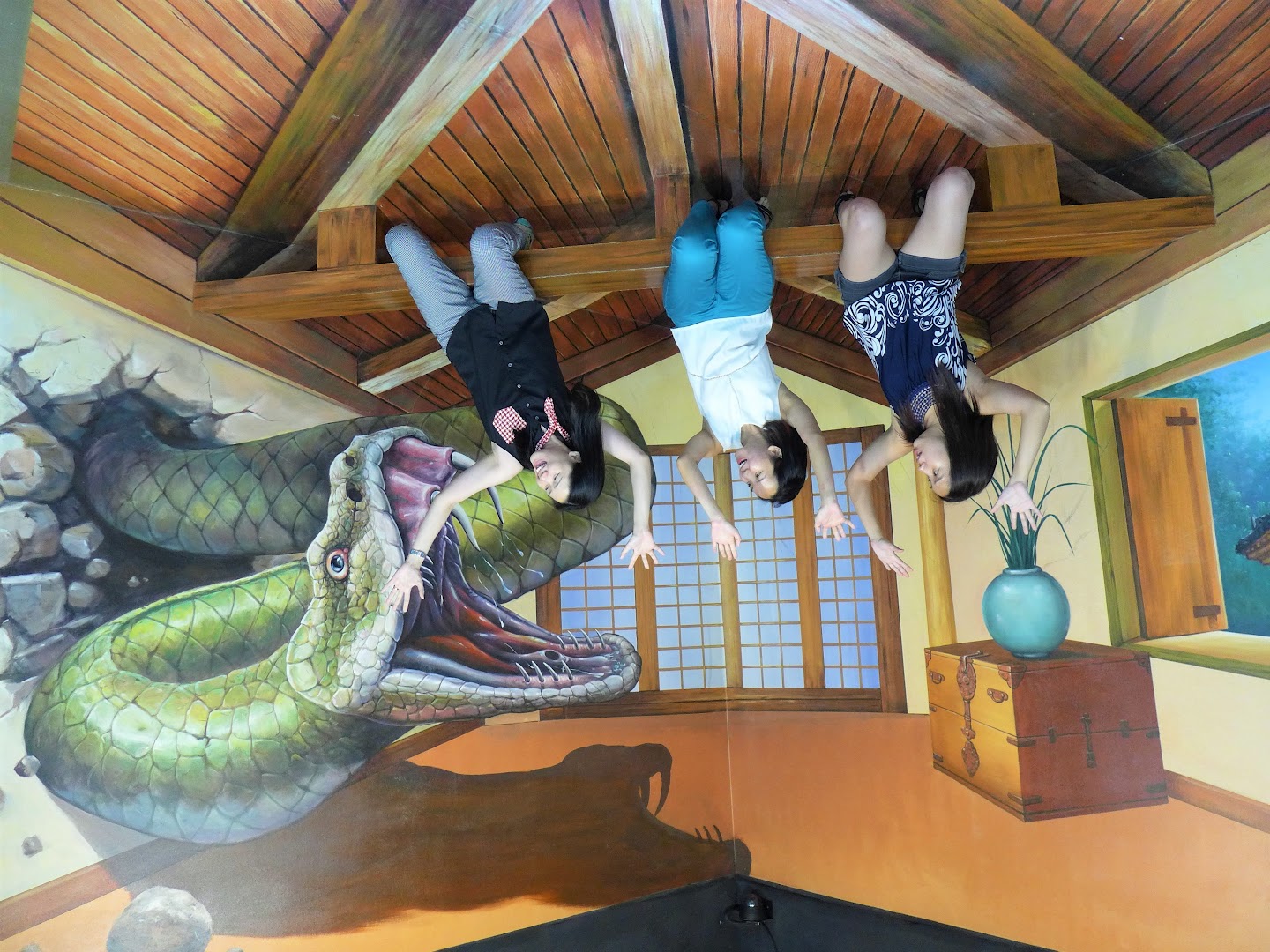 That akward moment once again when you realized that you were the ONLY ONE looking scared when the snake appeared.

My friends looked more like they were enjoying a rollercoaster ride. Don't believe? Flip the picture around and you shall see! 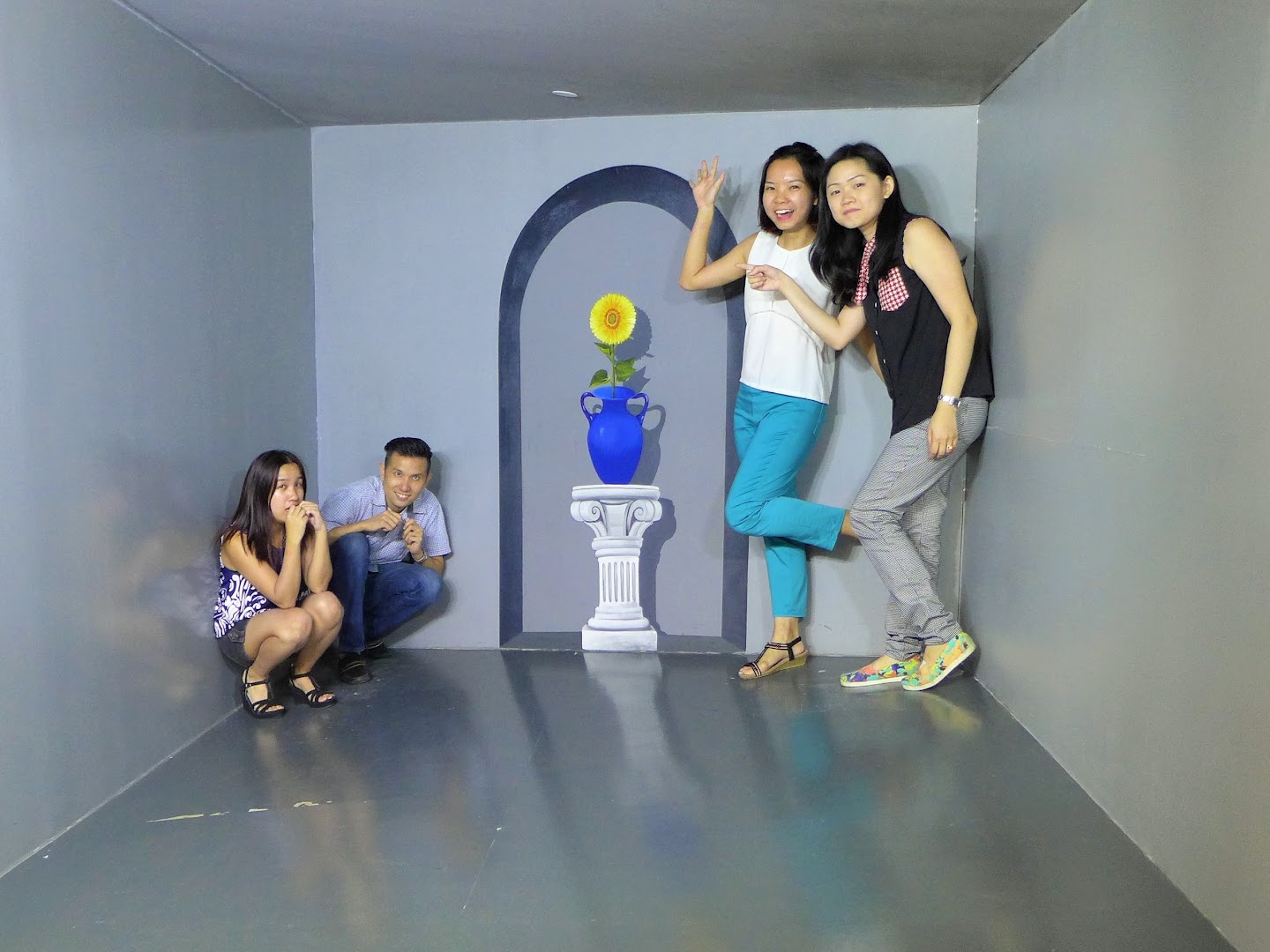 #TioBullied Picture 1. I may be small but I'm the boss! 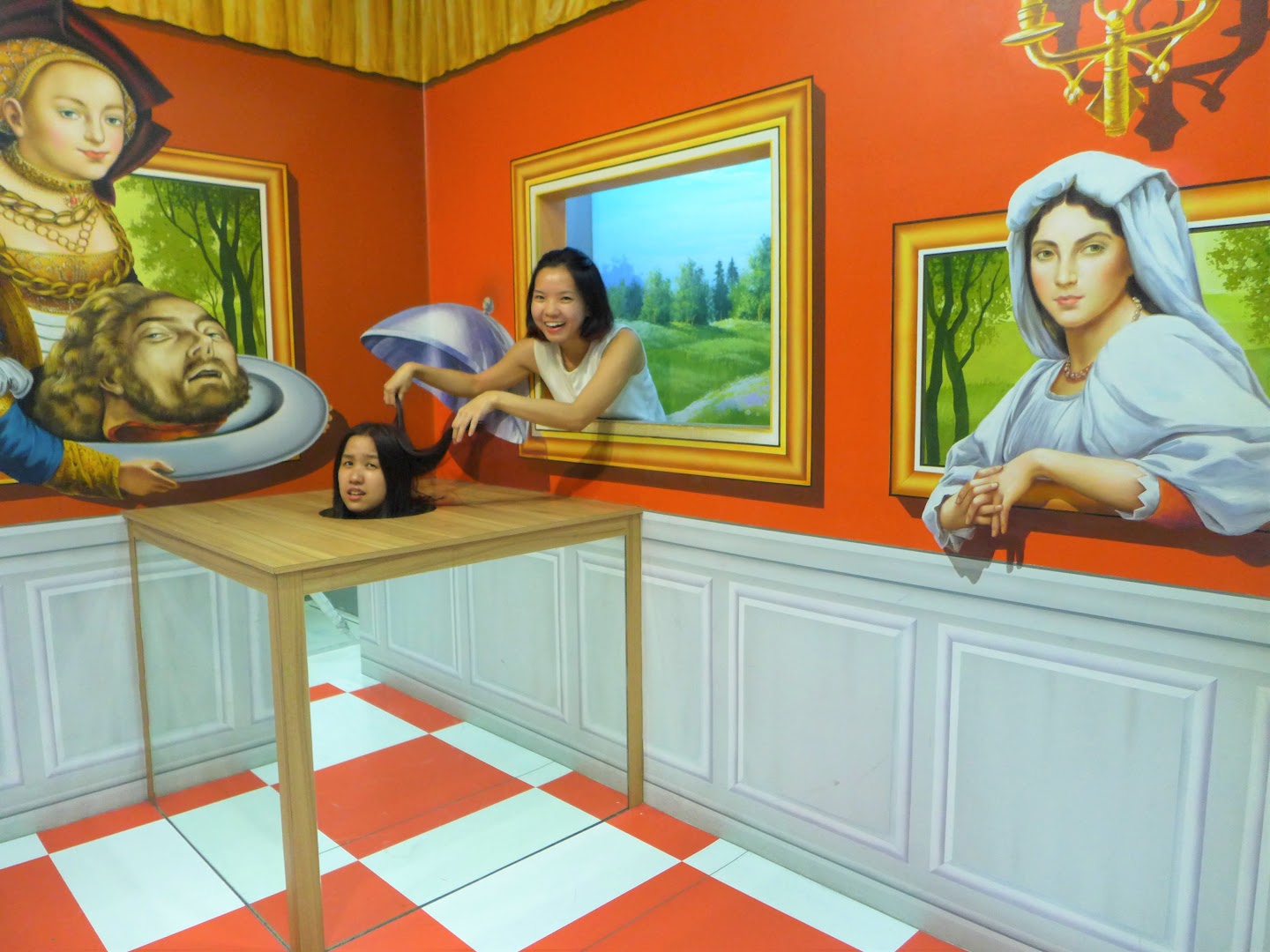 #TioBullied Picture 2. And that's how I spoke too soon and got eaten for dinner. THE END. 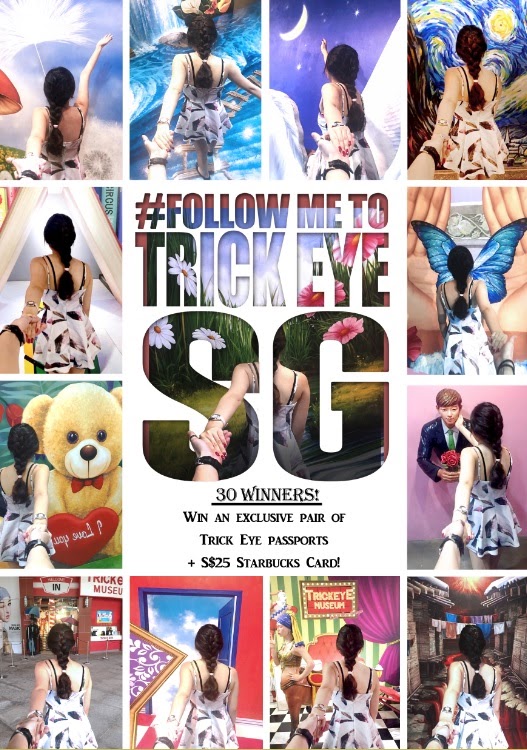 If you're thinking of visiting Trick Eye Museum to check out their new exhibits, you can take this chance to win yourself some goodies by participating in their #FollowMetoTrickEyeSG contest.

From now till 31 Jan 16, take your own creative shot (please be inspired by the poster above) at any backdrop within the museum and post it on Instagram with hashtag #FollowMetoTrickEyeSG. You'll also have to follow Trick Eye Museum's Instagram account at their handle @TrickEyeMuseumSG. 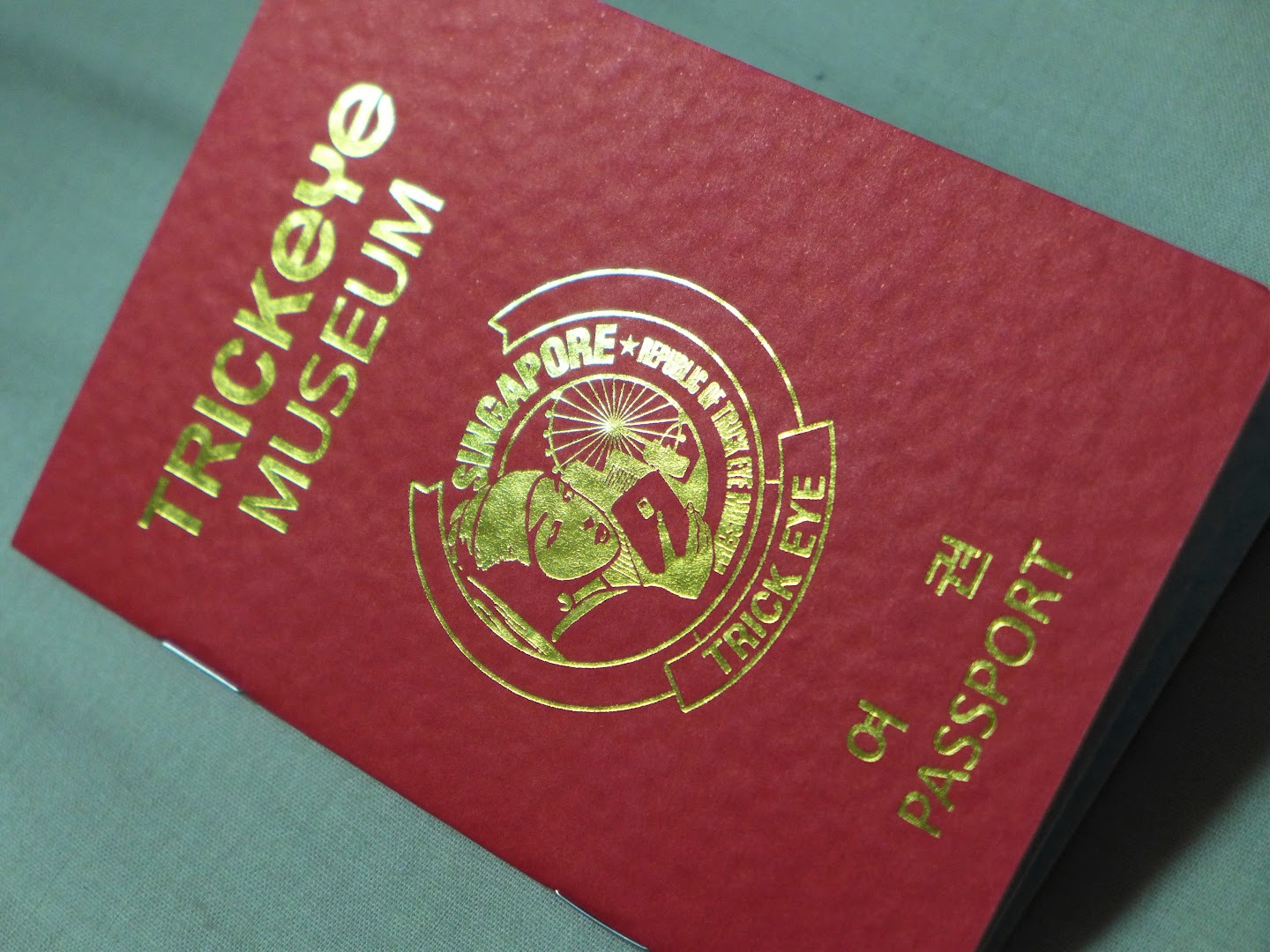 30 winners will get to win a $25 Starbucks card and a Trick Eye Museum passport that looks very similar to our local passport.

So...interested to visit the museum?

Adult tickets are priced at $25 per pax while tickets for children or seniors are priced at $20 per pax.
Tickets can be purchased onsite or online at Trick Eye Museum website or Resorts World Sentosa website.